When you move to another country many things happen to you. This is especially true whenever your new country speaks another language entirely than the one you grew up with. Many of their customs and traditions seem strange and foreign to you. That is most likely because that is exactly what they are, foreign. Except after spending a few weeks to months in the country, an odd sensation begins to occur. You slowly realize that the customs you saw as strange are not foreign; they are what is natural for where you are at. You begin to realize that you are the foreigner, and that all those things you grew up having ingrained into you like the value of time and germ theory are perhaps not as prized here as the States. Maybe it isn’t the worst thing ever as we could all benefit from slowing down and talking to our close friends about how Christ has worked in our lives over tea. 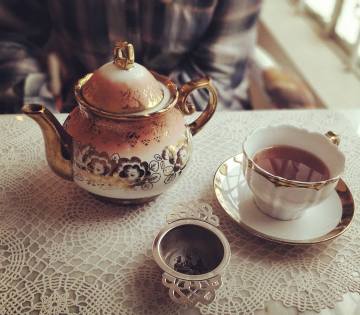 Still, there are moments that will occur that are, for a lack of any other word, inexplicable. One of these instances occurred while we were learning Spanish in Lima. We had been studying the language for about a month, while we lived in a small little two bedroom apartment near the school. We had been relaxing in the apartment, when all of the sudden our doorbell rang. This was odd, as we only knew a handful of people in Lima at this point. Our landlord always let us know if she was heading over. Only a few from the church knew how to get to our place, and they would have given us notice, wouldn’t they?

Our apartment wasn’t in – what would you say – a state of great presentation. We had laundry to be done, dishes to clean, and a bathroom ready to be scrubbed. Rachel and I quickly looked at one another and immediately knew the plan that had to be enacted. She would throw the laundry under the bed, close the bathroom door, and attempt to use a vanishing spell on the dishes, while I would go down and attempt to figure out who had decided to join our merry party.

The apartment was very typical of apartment buildings in Peru. There is a front central gate that all the tenants have a key to. This allows you to access the stairs or elevator (if one exists) to get to your individual apartment. Some of the nicer apartments have a “watchyman” (really, that is what they are called. I didn’t make it up). Ours, Roberto, met me at the foot of the stairs and said something to the extent of there is a lady at the gate wanting the residents of our apartment.

I cautiously approached the gate and the little lady who may have reached five foot tall with heels. I had no idea who she was or what she wanted us for, but I knew that this was going to be one of the first great tests for my limited Spanish. Up until then, the bulk majority of my Spanish usage had been in controlled environments: school, restaurants, markets, and stuff of the like. However, this was that moment when you realize that the only person that can get you past this situation is yourself. Knowing that I had no other choice, I walked up to the gate and uttered my best, “Buenas tardes.”

What followed is still one of the most bizarre conversations I’ve ever had. The lady looked up at me. She was older with dark eyes, many wrinkles in her face, and a traditional type floppy hat atop her head. Without missing a beat, she held up a small, clear sandwich bag and declared, “Debes recibir los dentes!”

“What!?!”, I responded in first English and then after realizing what I had done in Spanish. She repeated the phrase. Yup, I had heard her correctly. Granted my Spanish vocabulary was small, but I was almost certain of what she was telling me: “You must receive the teeth!” How does one respond to that?

For better or worse she didn’t let me respond. She just pushed the sandwich bag through the gate’s bars, held up a piece of paper that had my address and apartment number on it, pointed from it to me, and went into a frenzy of a lot of words I didn’t understand with “teeth, receive, late, and must” thrown in amongst a lot of phrases. She seemed to calm down when I reached up to take the bag. From what I could see, inside was some object that had been wrapped in paper towels. Looking into her eyes, it was apparent that she wanted me to open it to verify that they belonged to me. Curious as to if the most wanted ax murderer of Lima had escaped from Arkham Asylum and landed on my doorstep, I slowly opened the bad and unwrapped its contents.

What was inside was indeed teeth, or at least it appeared that way. It looked to be a mold cast from the impressions someone had had done. The teeth were definitely not belonging to me as A) I hadn’t had any dental work done in Peru other than a quick look at my teeth at Interpol when we had applied for residency and B) these teeth were in terrible condition. I’m no dentist, but if you’re missing several teeth, have the remaining ones set in haphazard directions, and one that looks to be pointing into the center of your month from the side of your gum, you’re either not from the States or have refused to see a dentist for the entirety of your life.

So there I was in a pickle. The lady was looking very pleased that I had finally come to the point she had wanted me to be at all along, but I wasn’t about to keep these teeth. Unfortunately I had no way of telling her they weren’t mine at that point. So I did the best I could and looked at her to say, “No es yo” (Yes I am aware now that my sentence had all sorts of issues). I think she got the idea, though, as this sent her into another frenzy of speaking at increasing velocity using those “must, receive, and teeth” words as well as pointing with great force from the teeth in my hand to my mouth.

Glad to be on the other side of the gate, I got her to calm down by asking for a moment and pulling out my cell phone to insinuate I needed to make a call. Who would I call? I decided upon Jonathan Cooper, one of the missionaries I had met in Lima. At the least, he would be able to more adequately talk to her than I could. When he picked up, I explained to him the situation as it had unfolded thus far. He told me to put her on the phone. I watched the lady as she explained to Jonathan her presence and her response of another fit of insistence when I imagine Jonathan had told her they weren’t my teeth. 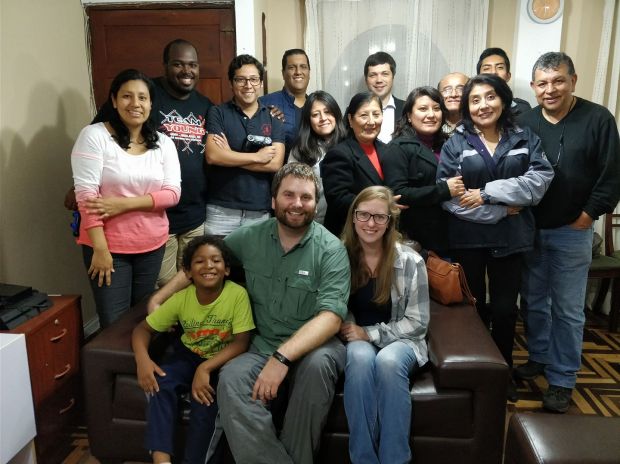 Johnathan and his wife, Bani (far left back row) work with the Church of Christ in Lima

After a few minutes, she gave me back the phone. Jonathan told me that she seemed convinced that I had had some dental work done and needed to take the teeth from her. We both agreed that about the only way out of this was to take the teeth and see if anyone else came looking for them. Hence, I hung up the phone, put the teeth back into the bag, and said, “Gracias.” The lady looked relieved and took off at a sprinter’s pace away from the apartment.

Now wondering if the teeth were about to explode at any given moment in some twisted terrorist plot, I went back up to the apartment to find Rachel still trying to get things in a cleaner order. I relayed to the story of all that had happened, and her mind echoed mine when she asked, “So are they going to explode?”

We settled on putting them on the table for the moment. It was about then that I wondered if perhaps these belonged to one of the family members of my landlord, and somehow they had been sent to us by mistake. I quickly sent a Facebook message to her granddaughter that could speak English.

She responded saying that she believed there was dentist that lived in the next stairwell over in apartment 408. This made sense, so I immediately took the teeth and went to investigate. I went to next stairwell and started to climb, but when I reached the top it only got to number 405. There was no number 408. Slightly defeated I started down again. At the bottom in front of apartment 402, a lady emerged with a phone in her hand talking at a rapid pace. It was obvious she was flustered. She took one look at the bag in my hand and said in perfect English, “You have my teeth.” Taken aback, all I could say was “Excuse me?” She went on to explain that she was the aforementioned dentist and had been expecting the teeth. I gladly let her have them, and then we laughed when we realized what had happened. She lived in apartment 402; we were staying in number 204. It had been a simple matter of dyslexia.  Our only regret was not getting a picture of the teeth, but everything happened really fast.

The whole experience is still one of the stranger events to occur to us since we’ve moved here. It showed us how we can never know what to expect out of the new place we call home. It showed us the importance of being friendly, attempting to understand where others are coming from, and at times just going with the flow. Eventually what is really happening will come to light.