This page is taken from The Cusco Team website. To keep up with articles from other teammates, please explore their website! Some of the teammates there were part of the original plant from 2009!

The City of Cusco

Go therefore and make disciples of all the nations, baptizing them in the name of the Father and the Son and the Holy Spirit, teaching them to observe all that I commanded you; and lo, I am with you always, even to the end of the age.”   -Matthew 28:19-20

Cusco is nestled in the Andes Mountains of southeastern Peru in an area known as the Sacred Valley.  The city is elevated at approximately 11,500 feet, and, although it lies close to the equator, its altitude gives the area a pleasantly mild climate year-round.  It was historically the capital of the Inca Empire, whose people believed the city to be the center of the world.  Cusco is widely visited by tourists from around the world.  Its famous Inca ruins are only seventy kilometers away from Machu Picchu, an archaeological site recently voted one of the new world wonders.

Peru is officially a Spanish-speaking country, and in Cusco many of its citizens are bilingual, speaking both Spanish and the native language of Quechua.  The city is rich in culture and history, and its people are very warm and receptive to American visitors who frequent the area.

The city is in a surge of development due to the migration of Quechua Indians from the surrounding rural areas.  Cusco is charming and pleasant, but there is also another aspect to the city.  It is inhabited by many who suffer from poverty and despair, but their main desire is hope for the future.  These individuals believe their salvation is in the city, where they can find a better life, and so the population has tripled over the last twenty years.  Cusco now has approximately 400,000 inhabitants, and the surrounding province contains 1.2 million.  Yet, only one small church has survived in Cusco throughout the years.  It is an area that is ripe for evangelism because of its growing population and influx of visitors.  It is a gateway city, and evangelizing this influential place could mean reaching countless numbers of people in the surrounding region.

Cusco has many religious traditions, and its people are very spiritually-minded.  We conducted religious surveys among the people of the city during our 2006 survey trip, and nearly everyone was receptive to answering questions regarding their spirituality.  Most of their traditions and religious celebrations extend from a superficial devotion to Catholicism.  For them, being Catholic is more of a cultural identity than a religious experience.  This will prove to be both an aid and a challenge as we seek to teach them the true way to the Father. 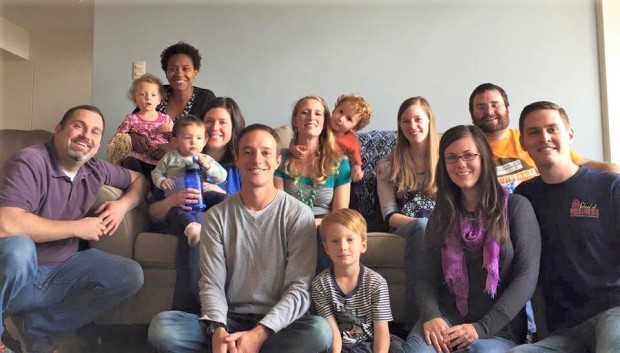 Two are better than one because they have a good return for their labor.  For if either of them falls, the one will lift up his companion.  But woe to the one who falls when there is not another to lift him up.  Furthermore, if two lie down together they keep warm, but how can one be warm alone?  And if one can overpower him who is alone, two can resist him.  A cord of three strands is not quickly torn apart.”   -Ecclesiastes 4:9-12

Allison grew up in Huntsville, AL and was a member of the Memorial Parkway Church of Christ.  She also attended Freed-Hardeman University from 2000-2003 and is a 2007 graduate of the University of Alabama in Birmingham with a degree in Art Studio and a concentration in Graphic Design.  She works as a graphic designer from home in Cusco, Peru.  Barton was raised in Haleyville, AL and attended the 9th Avenue Church of Christ.  He earned both a B.A. and M.A. in New Testament Studies from Freed-Hardeman University. They now have four awesome children: Cole, Celia, Elias, and Alba!

Jennifer was born and raised on the mission field in Taiwan.  Her family returned to the U.S. in 1989.  Her home congregation was the Quinton Church of Christ.  Jennifer attended Freed-Hardeman from 2000-2003 where she received her degree in Merchandising and Interiors with an emphasis in art.  Gary was raised in Seneca, MO where he attended the Seneca Church of Christ.  Gary has a B.S. in Missions and a M.Min from Freed-Hardeman University.  He is also a veteran of the U.S. Army. Gary and Jennifer have two really cool boys: Logan and Brody!

Sarah grew up in Clemmons, NC and was a member of the Warners Chapel Church of Christ. She graduated from Freed-Hardeman University in 2009 where she earned her Bachelor of Science in Conmunication. After graduation, she worked as a Graduate Recruiter for Freed-Hardeman University. Ryan was raised in Tullahoma, TN and was a member of the Grundy Street Church of Christ. He earned his Bachelor of Arts in Bible and Bachelor of Business Administration in Finance and Bible in 2011 and a Master’s in Ministry in 2013 at Freed-Hardeman and then worked as a Financial Advisor before moving to Cusco, Peru. Ryan and Sarah have just recently welcomed a new addition to their family, Luke Ryan! Ryan and Sarah have a website, the Davis Cusco Mission, where they post articles on life in Cusco and give updates on the work there!

Corrine is the single female missionary on the team. She was born in Coral Springs, FL and got her degree in nursing at Auburn University at Montgomery in 2012.

Keli grew up Jacksonville, FL. She earned her bachelors degree from Freed-Hardeman University in 2006. Kevin was raised Dyersburg, TN and also earned his degree from Freed-Hardeman! Kevin and Keli met each other in 2011 after they were both in China on a mission trip at the same time. They were married in 2013. Keli is a co-owner of a Christian Lifestyle blog named The Ruffled Mango, where she sometimes posts articles on life in Cusco. Kevin and Keli also have a little girl, Elanor, and a baby boy on the way!!

Rachel grew up in Winchester, TN. She earned her Bachelor of Science in Biochemistry from Tennessee Technological University in 2012 and worked in a veterinary clinic before beginning the process of becoming a missionary. Her home congregation is Winchester Church of Christ in Winchester, TN. Mitchel was raised in Tullahoma, TN where his home congregation was Cedar Lane Church of Christ. He earned his Bachelor’s and Master’s degree from the University of Tennessee and worked as a controls engineer for General Motors before becoming a full time missionary.

And He gave some as apostles, and some as prophets, and some as evangelists, and some as pastors and teachers, for the equipping of the saints for the work of service, to the building up of the body of Christ.”   -Ephesians 4:11-12

Goal #1:  Bring the lost of all socio-economic classes to faith in Jesus Christ, but targeting middle class heads of households in an effort to reach whole family units that can impact the city.

Goal #2:  Incorporate these new believers into one dynamic local church with an eventual attendance of 300 to 500.

Goal #4:  Secure a permanent church building, attractive to all classes of people, at an accessible, centralized and well-known address that takes into account the particular needs of each city.

Goal #5:  At the appropriate time, plant at least one additional congregation before the team leaves the field.